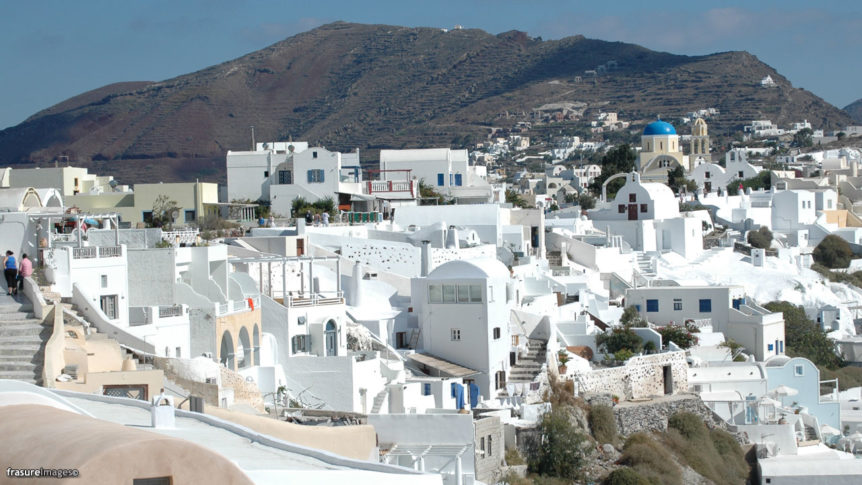 Santorini, Greece is an island in the southern Aegean Sea. Santorini is essentially what remains after an enormous volcanic eruption that destroyed the earliest settlements on a formerly single island, and created the current geological caldera (volcanic feature usually formed by the collapse of land following a volcanic eruption).
Traces of a centuries-old and important history is etched in every corner of Greek land: findings from the Prehistoric and Archaic Periods, unique works from Classical, Hellenistic, Medieval and Byzantine monuments, creations from folk art cultures, traces from the passing eons of other civilizations and different religions, that coexist with current creations, constructions and modern works of art.
Traditional architecture of Santorini is low-lying cubical houses, made of local stone and whitewashed or lime-washed with various volcanic ashes used as colors. The unique characteristic is the common utilization of the hypóskapha: extensions of houses dug sideways or downwards into the surrounding pumice. These rooms are prized because of the high insulation provided by the air-filled pumice, and are used as living quarters of unique coolness in the summer and warmth in the winter. These are premium storage space for produce, especially for wine cellaring: the Kánava wineries of Santorini. The cuisine is largely that of Greece culinary with emphasis on the tomatoes grown in the Santorini region. The RJ Travel Advisors™ staff last visited Santorini October 2014 and all agree this is a destination that they want explore further.