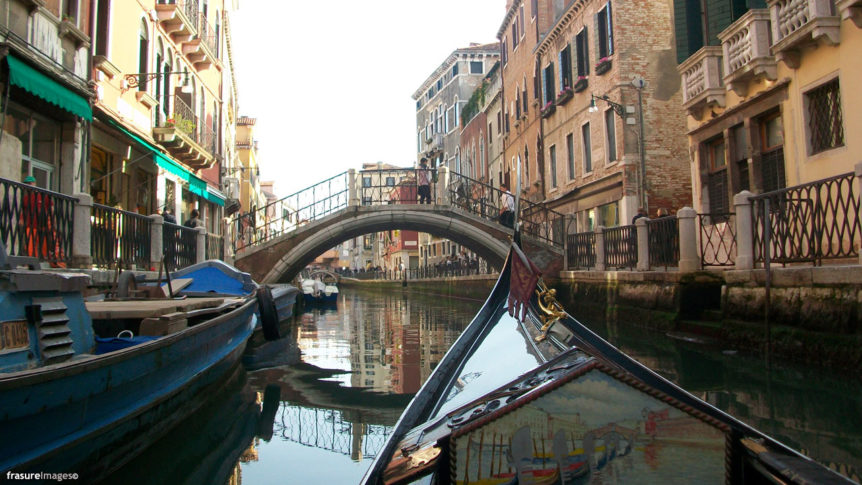 Venice Italy is a city in northeastern Italy sited on a group of 117 small islands separated by canals and linked by bridges. Venice is the capital of the Veneto region. The buildings of Venice are constructed on closely spaced wooden piles. Most of these piles are still intact after centuries of submersion. The foundations rest on plates of Istrian limestone placed on top of the piles and buildings of brick or stone sit above these footings. The piles penetrate a softer layer of sand and mud until they reach a much harder layer of compressed clay. Venice has a humid subtropical climate, with cool winters and very warm summers
Venice is one of the most important tourist destinations in the world for its celebrated art and architecture. The city has an average of 50,000 tourists a day (2007 estimate). In 2006, it was the world’s 28th most internationally visited city, with 2.927 million international arrivals that year. It is regarded as one of the world’s most beautiful cities.
Venezia is a city of small islands, enhanced during the Middle Ages by the dredging of soils to raise the marshy ground above the tides. The resulting canals encouraged the flourishing of a nautical culture which proved central to the economy of the city. Today those canals still provide the means for transport of goods and people within the city.

St. Mark’s Basilica is a must-see. Originally built in the first century A.D., the church’s entrance is flanked by replicas of bronze horse statues that were originally pillaged from Constantinople. Be sure to dress properly and respectfully to visit, as you won’t be allowed to cross the bronze horses with bare shoulders or knees.
Venice is filled with museums that brilliantly display the city’s rich artistic past. One of the most well-known is the Academy Gallery (Gallerie dell’Accademia) in Dorsoduro. The modern art housed in the nearby Peggy Guggenheim Collection is also quite popular, as is the Palazzo Ducale (Doge’s Palace).
Gondolas may provide the most defining picture of Venice. Back in the day, these slender and shallow boats steered by a single, trained and respected gondolier were the main mode of transportation. Today, they are mainly for visitors and are priced that way. Nevertheless, a gondola ride down the Grand Canal is worth the splurge. The best — but most expensive — time to ride is dusk; however, it’s also the prettiest and most calm time to see the sights.
The streets of Venice are lined with little stores selling a range of items from high-end designer goods to affordable souvenirs. If you want to get something Venetian to take home, be aware that the city is known for crafting various items such as Carnival masks, glassware and lace. The Venetian islands of Murano and Burano, in particular, are famous for their glassmakers and lace makers, respectively. However, with the rise in the tourism industry, one must still be on guard for less than authentic goods.
This is just the tip of the ice-berg when it comes to Venice and the how, what, when, and where of experiencing Venice.